2019 Poetry at Hayner: A Mosaic of Voices 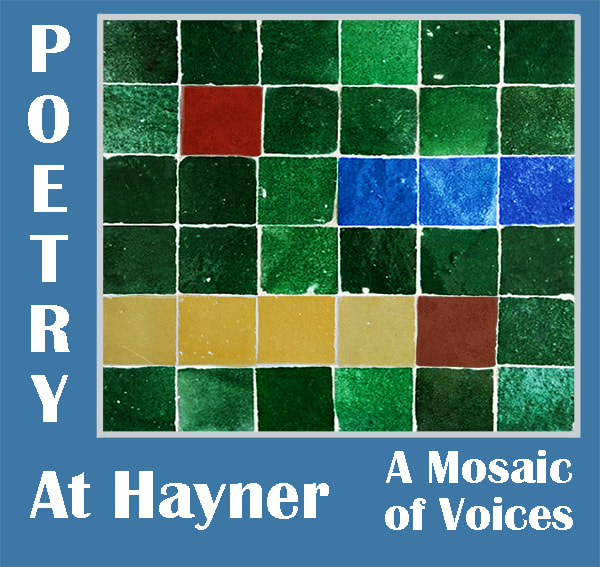 Our 2019 Poetry at Hayner: A Mosaic of Voices event was very well received. Below is a description of the 2019 event. ​

​New Poetry At Hayner Event Will Feature a Mosaic of Voices
​April 6, 2019 at 7:30 pm
The Troy-Hayner Cultural Center is announcing a new poetry event on Saturday, April 6, 2019 at 7:30 pm. “Poetry At Hayner” will feature twelve poets in a mosaic of voices to encourage a variety of subject matter, perspective, rhythm and meaning. These invited poets will read their own works in five-minute segments followed by an intermission featuring beautiful hors d’oeuvres and wine bar. The second half of the evening will feature an open mic hour. Sign up for open mic at the event beginning at 6:30. Time slots are limited, be sure to get your name on the list. Watch the Hayner website to learn who our twelve invited poets are for the 2019 Poetry at Hayner, a mosaic of voices.

John Booth
Grace Curtis
Elijah Davis-Galentine
David Garrison
Pauletta Hansel
Herbert Woodward Martin
T. J. McGuire
Jonie McIntire
Chuck Salmons
Shannon Saylors
Elizabeth Cantonwine Schmidt
Kerry Trautman
John Booth is a performance poet, multi-instrumentalist and recording artist.  He was a four-time member of the Dayton National Poetry Slam Team and the 2002 Dayton Slam-off Champion.  He has earned nicknames including, “Big Brother”, “The Truth” and “The Assassin with Words” for his straightforward style of writing and performing this thing that everyone else calls poetry.

Grace Curtis published "The Shape of a Box", in 2014 through Dos Madres Press. Her second Dos Madres Press collection, "Everything Gets Old" will be available in 2019. Her chapbook, "The Surly Bonds of Earth", was the 2010 winner of the Lettre Sauvage chapbook contest. Her writing can be found in numerous journals. Learn more about Grace at: GraceCurtisPoetry.com

Elijah Davis-Galentine is a multi-instrumentalist who plays drums, bass, and cello as well as other instruments. These skills may account for his budding, but keen interest in traditional poetic forms like sonnets and sestinas. As a high school student enrolled in Sinclair Community College's Poetry Writing course this Spring, he has experimented with both forms for his own pleasure and showed enthusiasm for the challenge of self-expression within specific structures. Elijah's interests and experiences, namely a passion for environmentalism, high value on visual arts, and cultivation of relationships to create inclusive communities aids in his discussion and understanding of fellow students' work. New to the art of writing poetry, Elijah has shown respect and love for a variety of forms from performance poetry to traditional works which has made him a respected voice within his Sinclair workshop.

David Lee Garrison was named Ohio Poet of the Year in 2014 for his book, "Playing Bach in the DC Metro", the title poem of which was featured by Poet Laureate Ted Kooser on his website, “American Life in Poetry,” and read on the BBC in London.  His latest is "Carpeing the Diem: Poems about High School" (Dos Madres Press). Learn more about David Lee Garrison at the poetry foundation at this link: PoetryFoundation.org/poets/david-lee-garrison.

Herbert Woodward Martin served as professor of English and poet-in-residence at the University of Dayton for more than three decades where he taught creative writing and African-American literature. He has authored nine volumes of poetry including:  "A Rock Against the Wind" (Berkley Books, 1996), "Escape To The Promised Land" (Bottom Dog Press, 2005), "In His Own Voice" (Ohio State University Press, 2002), "Inscribing My Name: Selected Poems" (Kent State University Press, 2007), and has devoted decades to editing and giving performances of the works of the poet and novelist Paul Laurence Dunbar (1872-1906). Learn more about Herbert Woodward Martin at: Badilishapoetry.com/herbert-woodward-martin

T. J. McGuire is the author of "Mid-life Chrysler" (Kelsay Books, 2017). He was awarded Best in Show for the Antioch Writers' Workshop Scholarship in 2017, and has received previous scholarships by AWW in 2014 and 2015. His work can be found or is forthcoming in journals such as "Red Fez", "Chagrin River Review", and "Slippery Elm". He currently hails from Dayton, Ohio. Learn more about T. J. McGuire in this Dayton Daily News article: DaytonDailynNews.com McGuire

Jonie McIntire is the author of "Beyond the Sidewalk" (NightBallet Press, 2017) and "Not All Who Are Lost Wander" (Finishing Line Press, 2016). She will be releasing her third chapbook, "Semidomesticated" (NightBallet Press) later this year. Her poems have even been stamped into cement as part of Toledo, Ohio’s Sidewalk Poetry series. Click here for a nice article about Jonie McIntire.

Chuck Salmons is President of Ohio Poetry Association. His poems have appeared in numerous journals and anthologies, including "Pudding Magazine", "Evening Street Review" and "Everything Stops and Listens". He has two chapbooks, "Stargazer Suite" and "Patch Job". Chuck won the 2011 William Redding Memorial Poetry Contest, sponsored by The Poetry Forum of Columbus, and is recipient of a 2018 Ohio Arts Council Individual Excellence Award for poetry. Learn more about Chuck Salmons at: www.chucksalmons.com

Shannon Saylors is a senior at Tippecanoe High School. She is very excited to present her poetry at this event  with such honored poets. She uses her writing as a platform for the social change she’d like to see in the world as well as a space for personal reflection.  Her pieces have been published in Inferno, an award-winning literary magazine of student submissions.

Elizabeth Cantonwine Schmidt lives in Kettering and is inspired by long walks, stairways, tunnels, secrets, fossils, maps, and other mysteries. She loves thunderstorms and good books - especially at the same time! Although not a musician, she listens closely for the bassoon part.

Kerry Trautman is a lifelong Ohioan and a poetry editor for the journal "Red Fez". Her work has appeared in dozens of literary journals and anthologies. Her chapbooks are "Things That Come in Boxes" (King Craft Press, 2012,) "To Have Hoped" (Finishing Line Press, 2015,) and "Artifacts" (NightBallet Press, 2017). Learn more about Kerry Trautman at this website: ToledoPoet.com Kerry Trautman